I don’t drink coffee.  I used to, lots of it, strong and without milk or sugar.  But about 15 or years ago I fell out of love with it and hardly touch it now.  Occasionally, maybe once a month I may have a mid morning coffee with friends, but certainly no  more than one and it is a notable event.

However, tea is another matter altogether.  I start the day like this.  One pot of English breakfast tea (also without milk or sugar).  Always in  my chicken pot and always with my chicken cup and saucer.  I am a creature of habit.  I do vary the tea cosy!

On our recent visit to Albania I saw somebody drinking a proper herb tea (i.e. the full plant not dried up bits in a tea bag – I HATE tea bags, but that’s another story). Curious, I asked what it was and ordered a pot with my lunch.  Actually I did that the other way around and drank it first and discovered what it was afterwards!

Sideritis raeseri (not to be confused with Sideritis scardica or any of the other wild Sideritis many of which are at risk of extinction and should not be picked or indeed purchased), also known as ironwort, mountain tea, shepherd’s tea  is the only Sideritis which is cultivated  and has been drunk as a decoction for thousands of years (even mentioned by Dioscorides). It has a pleasant taste and I had it with breakfast every day and frequently during the day as well.  It is a habit I have continued since I returned home.  I brought plenty of the dried herb home with me and though I can replenish my supply through various well known internet sales sites it is not clear that I can be sure that it is the raeseri I am buying rather than one of the endangered species.  So I am trying to track down some seeds.  Unfortunately all I can find from a reputable (i.e. I know that the seeds will be what they say they are) supplier is Sideritis syricia.  So I’ll have to try that out instead.

Ready for the boiling water. 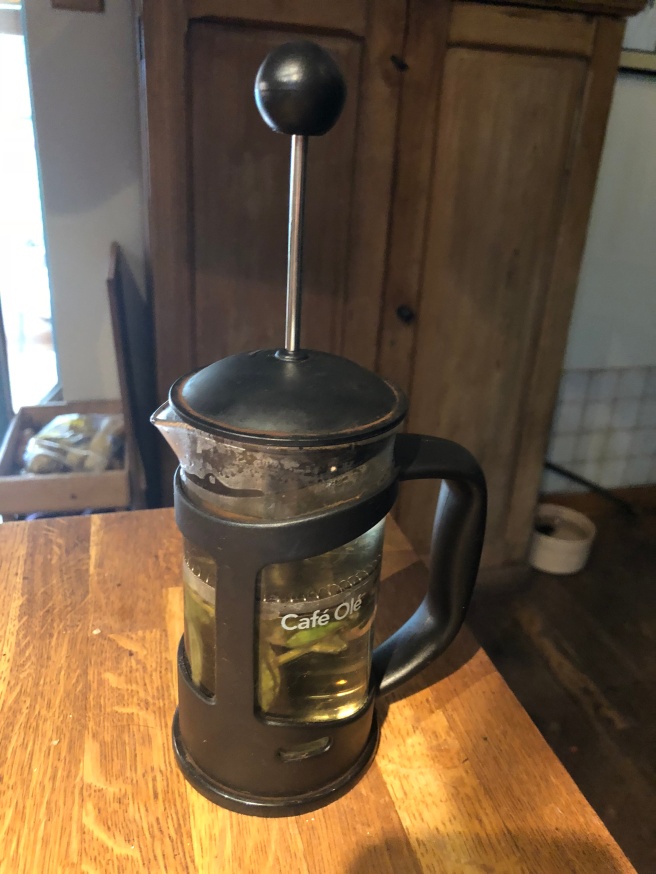 It is traditionally taken as an aid to digestion and to strengthen the immune system.  Considerable research has been undertaken on this unassuming plant and it has been proven to have anti-microbial, anti-inflammatory and anti-oxidant action.  As we were travelling I restricted my tinctures to just digestive bitters and left the echinacea I usually take at home.  Whilst we were away Stuart developed a monster of a cold which went straight to his chest.  I drank my Albanian chai every day and remained entirely cold free despite all his coughing and sneezing 🙂