When we first moved into this house, back in 2000, my husband got a great deal on some gooseberry canes.  He likes a good deal, these were the days before the internet and online selling really took off and much joy was derived from scouring the weekly Ad-mags for bargains to help in the two year rebuild and renovation of the house and grounds.  So we were the proud owners of some 50 gooseberry canes.  Yes, that is correct, no typo.  Fifty canes.

We had the space and there was a perfect spot for them by the secret garden.  However, as even the most beginner of gardeners will know.  Gooseberries need to be pruned and trimmed or they turn into sharp-thorned triffids.

Ours became, over time, sharp-thorned triffids, and the sharper the thorns and the triffidier (I do like that word) they became the less inclined we were to brave the gooseberry patch and whip them under control.

This spring the battle of Gooseberry Green began and we won.

I wasn’t expecting much of a harvest this year.  I was mistaken.  We have had several small bucketloads already and there are plenty more to come.  Thus far I have made mackerel and horseradish sauce for the lovely fresh mackerel Stuart has been catching.

Then gooseberry and lemon curd, gooseberry fool and still there are more to come.  So if you are passing, pop in and go home with a bag of goosgogs :_ 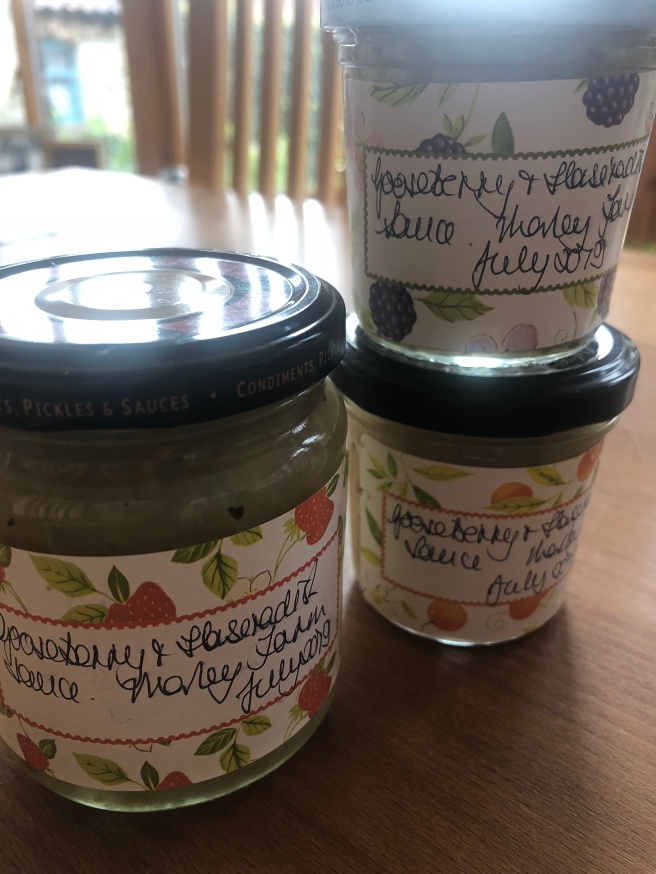 It’s hardly a recipe but here goes.  Put the fruit in a heavy bottom pan with a splash of water (only a splash). Add roughly one tablespoon of sugar to each handful of gooseberries.  Stir over a gentle heat until the fruit is soft and squishy.  Add horseradish to taste, I like it quite hot, but even if you don’t, a little gives it a lovely zing.  Cool and pour into clean jars.  Keep in the fridge and use within a week.

Another recipe that is hardly a recipe.  Prepare the fruit as above.  Whip the cream until stiff.  Add yoghurt, I use equal quantities of whipped cream and yoghurt.  Stir in cooked fruit.  Pop in a bowl and put in the fridge for at least an hour before serving.

This is a proper recipe and comes from Hugh Fearnley-Whittingstall

Place the fruit in a heavy bottomed pan with the lemon juice and cook gently until squishy.  Push through a fine sieve to obtain a puree.

Put the puree, butter and sugar in a Bain Marie and heat gently until the butter is melted and the mixture rich and shiny.

Beat the eggs and whisk into the cooled fruit sugar and butter mixture.  Replace over the Bain Marie and stir constantly until the mixture is thick and creamy.  If you have a thermometer, it will need to reach about 84C before it starts to thicken.  Don’t be tempted to rush this stage, or it will curdle.  If it does start to curdle whip it off the heat and whisk as fast as you can and cross your fingers!

When thick pour into sterilised jars and spread thickly over your breakfast toast!

The tomato harvest has finally come to an end.  We mostly grow cherry toms and on clearing out the greenhouse we were left with a bowl of rather mixed and manky looking tomatoes.  On the basis that we, the humans, get first dibs before the chooks the sad looking collection was transformed into bottled roasted tomatoes. 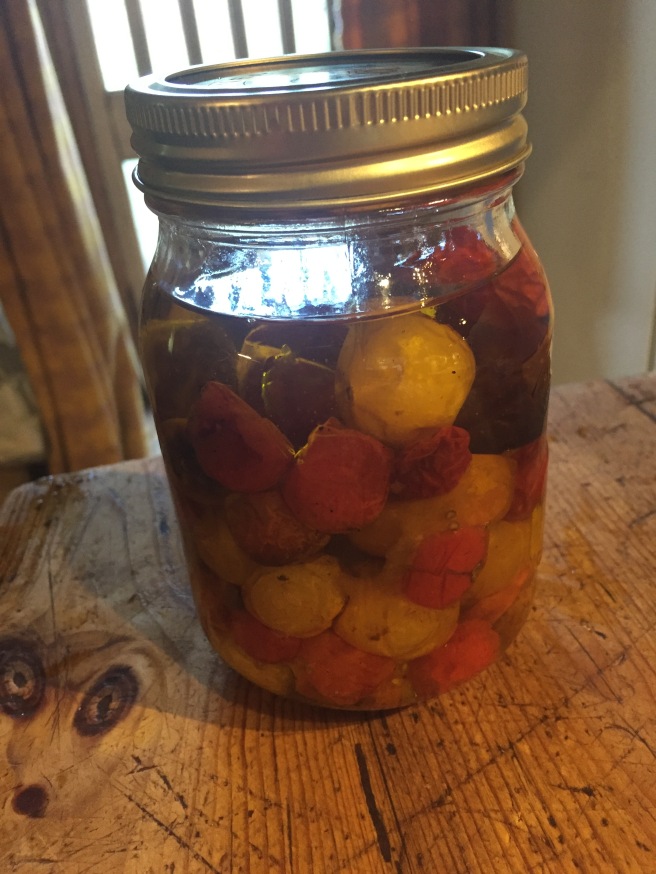 Place the tomatoes on a roasting tray and sprinkle with salt, pepper and olive oil.  Place in a very low oven (50 C or less or the bottom of the Aga) for at least 8 hours or overnight.  This really is where the Aga comes into its own.  Check on them every now and then after about 8 hours and when they are dark, soft and almost caramel like pop into a sterilised jar and cover with olive oil.

Perfect as the basis for a tomato pasta sauce.