Several weeks back it rained.  It rained a lot.  Having been caught out the previous year by the sheer volume of water pouring off the fields and into Singer Two’s bedroom we had our flood defence system in place.  It was rubbish.  It was the chocolate fireguard of flood defences and the muddy water took up residence in the Gin Gan, the Pantry, the Airing  Cupboard and once again in Singer Two’s bedroom.  Singer Two understandably did not take it well.  The Dancer, on the other hand, desperate for a new carpet inquired whether she too could have a new Berber and underlay if she chucked a couple of gallons of water on her bedroom floor.  The answer was no.

However, there is a bright side to every cloud.  I recently read Zero Waste Home  by Bea Johnson.  I bought it thinking I might get a few tips, but I was pretty sure I was doing okay.  How the mighty are fallen.  I am not even scratching the tip of the iceberg.  And talking of icebergs that was what our house was.  A small visible area and  rooms and cupboards and outbuildings full of stuff we don’t need or use.

The flood was my gift.  I had to clear up and sort out so I might as well do it properly.  It’s an odd process, at first you are ruthless, then a period of remorse sets in.  “Do I really want to let go of this?”  It is at this point that most people (often myself in the past) stop.  But ride through that storm and the next stage is guilt.  Guilt that we have bought so much stuff we didn’t need, didn’t use and didn’t really even want.  The wastage of money, time, space, energy. 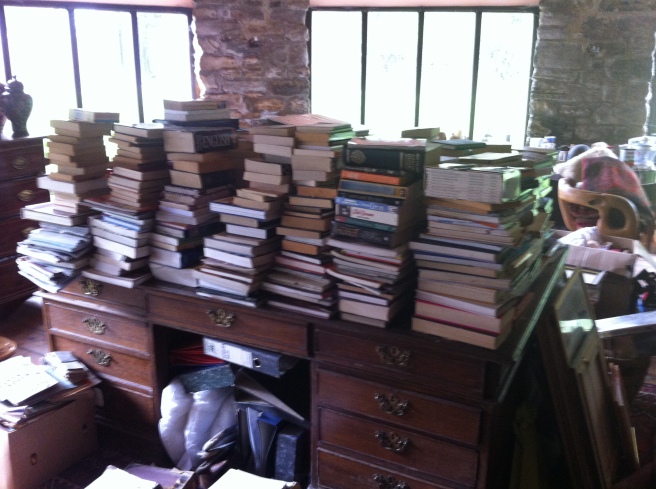 But the feelings of guilt and shame were countered by the wonderful feeling of space in our house.  The feeling that the air could move, there was no stagnancy. 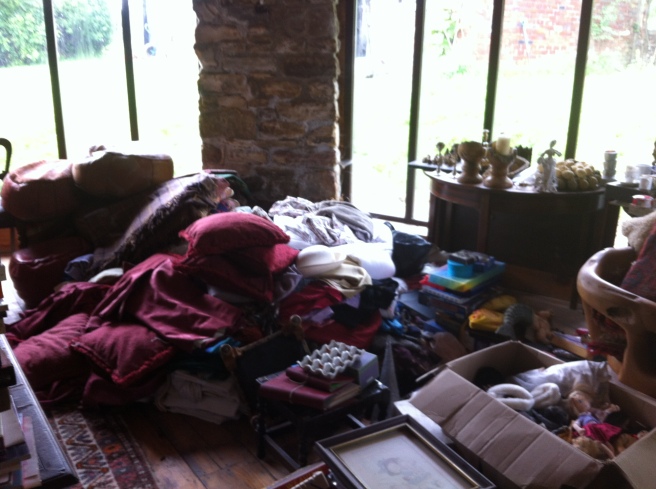 I am not finished, I have the outbuildings still to do and one study and the kitchen but already I have said never again.  Never again will we accumulate and waste so much.

So rule one is one in one out.  Yesterday we were in Glasgow for the Springsteen concert (yes he was brilliant, but did you expect anything else?)  Pootling around our old haunts in the West End I found these.  Green suede Bally, almost unworn, my size £20 and I got the wooden shoe trees as well!  So on my return I removed one pair of black suede shoes that have seen better days and added them to out piles growing in the Gin Gan.  It’s a small start but one pair of shoes at a time I will bring this house as close to Zero Waste as I can.  I may never achieve the dizzy heights of Bea Johnson but if you don’t have a dream there isn’t anything to come true.

(For those of an inquisitive mind: the duvets and linen are going to the Women’s Refuge, the books are going to Borderline, the rest will go to the Hospice shop and we have sold most of the unwanted furniture.  It was as easy as that.)